Our maritime climate is distinctly different to Auckland city just 12k away to the west. We are warmer and dryer when it matters (particularly January to April), lying in the rain shadow between the Waitakere ranges to the West and the Coromandel peninsula to the East.

Some studies have  confirmed the similarity of our climate to the Medoc in Bordeaux – another distinctly maritime region. However our latitude is equivalent to the south of Spain and it is the surrounding sea that keeps our diurnal temperature range cooler and narrower.

High rainfall (irrigation not required), dry summers (no significant rainfall for 3-4 months up to harvest in most seasons), high UV and salt-laden desiccating winds off the sea (great botryitis control), are all significant factors.

According to some studies, the rock beneath the vineyard is the single most significant factor in variations of grapes and wine from site to site. The vineyard sits on the eroded and exposed core of what was once a massive mountain ridge (hence our name) composed of deep core rocks of the Upper Jurassic period about 5000 metres thick and 155 million years old. These rocks are made up of a top layer of thick, fine graded sandstones, finely bedded mudstones and silstones with magnesium nodules, argillites and thin layers of mysterious rocks called cherts composed of almost pure silica from great depths in the abyssal trench.

The thin, young, acidic, cracking clay and stony soil contains weathered Jurassic rock fragments from the core of the mountain beneath and a layer (‘pan’) of grey ash from nearby volcano Rangitoto. The soil was , low in calcium, boron and phosphate-poor, with low organic matter, but rich in iron and magnesium from the basaltic volcanic intrusions into the sedimentary base rocks below. The cracking clay soil sets hard in summer with cracks several centimetres across.

As we planted we struck 3 or 4 cm of grey volcanic ash set into a hard pan in the lower zone of the topsoil which in places had to be broken through using a heavy crowbar. This was from the nearby basaltic volcano Rangitioto which erupted many times up to about 600 years ago, burning off the native Kauri forests on the West end of Waiheke and the adjacent islands in the gulf.

Our impoverished soils are separated from the base rock by varying depths of aluminium-rich, water-retaining yellow clay. If the best wines are made in the poorest soils then we have a great foundation!

We have an intensive organic program of soil improvement with composting (picking up by hand and mulching all our pruned canes into our compost heap with marc from the winery (stems, seeds, skins and lees), together with seaweed fungal enhancers and organic lime. In addition, we promote wild pasture with wild flowers in all our rows to increase the organic matter and attract beneficial insect predators. The vineyard is managed entirely ithout irrigation (ie dry farming).

We established our vineyard in the autumn of 2002 by hand-planting dormant vines, initially the Syrah MS (‘Hermitage’) block, followed by newly imported quality clones of Cabernet Franc from Bordeaux, Montepulciano, Pinot Gris and Syrah ‘Chave’. As the best wines require optimum fruit quality, we aim for full phenolic extractability through proactive viticultural techniques including careful soil management with annual soil tests, composting, improving the biomass and the organic matter and avoiding copper sprays and herbicides, the accumulation of which can reduce and eventually destroy soil quality. Canopy management is continuous throughout the early season – bud removal, shoot thinning and selection, and shoot positioning by clipping individual shoots into the trellis wires to secure a porous, non-dense, vertically shoot-positioned trellis. This completely avoids the need for leaf removal (‘plucking’) with the consequent risk of off-flavours from sunburn. The perfect canopy is when you can see the gender of any assistant three rows in! Mowing is restricted to the undervine area and native pasture and wild flowers are encouraged in the aisles throughout the year (see below). Bunch-thinning or ‘green harvest’ is carried out before veraison to achieve optimal, low fruit yields and good airflow penetration around the fruit.

As certain grape varieties require cooler conditions than we have on Waiheke – for example, there are no Pinot Noir or Reisling vines on the island  – we decided to plant a vineyard in the South Island where we could grow our own grapes in optimal terroir. In 2006 we acquired a block in the Waihopai Valley, in the Southern Valleys sub-region of Marlborough and planted our Sauvignon Blanc on two ancient river terraces composed of windblown glacial loess soils over stony riverbed deposits and alpine Jurassic greywacke. Jurassic Terraces vineyard was born, Here we make our lees-aged Sancerre-style Sauvignon Blanc wine from whole bunch pressed grapes hand-picked from low-cropped single fruiting cordons. This wine is only made when the grapes are in great condition. 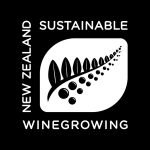 As we are only transient custodians of our land it should be handed on to the next generation in a better shape than when we acquired it.
As well of course we should do no harm to the environment throughout our journey.

We are fully accredited members of Sustainable Winegrowing of New Zealand (SWNZ Registered and Certified Vineyards AK1012 (Waiheke Island) and MB1329 (Waihopai Valley); SWNZ Registered and Certified Winery 4040), and are monitored and audited in many critical areas, including the safe and controlled use of agrichemicals, soil improvement strategies, good fertiliser practices, pest monitoring, control of water use and disposal and recycling of waste.

Our soil improvement program is guided by regular soil tests and fertiliser applications are controlled by soil and foliar tests using the latest techniques. Sprays are increasingly organic and biological and we apply our sprays only in full accord with the NZ Wine Institute Export Spray Programme to avoid as far as possible, any chemical residues in our product (Nil Residue Programme – complies with NZ Wine Export Programme).

Birds are not shot but excluded from the vineyard after veraison by the application of total enclosure netting. The waste from our vineyard, winery and olive press is recycled by mulching and/or composting with beneficial fungal promoters and reapplied to the vineyard, thus maintaining the quality of the soil through returning essential nutrients.